Sandy, a young South African photographer based in Capetown, says this of his work: “My Idle Quarters collection takes a unique look at the presence of eerie abandoned spaces such as old ghost houses like Kolmanskop. These ‘photographic relief dioramas’ create a three dimensional visual effect that draws you into the image and makes a stronger connection of presence and reality of the subject. The traditional two dimensional media of photography portrays a realistic interpretation of a scene but I push this form of reality even further by creating three dimensional dioramas from his photographs. Much of the artwork is made from bending and joining cut out prints of the walls, floor and doors at an angle. With added details around hidden corners it is possible to see more of the scene from an angle, further enhancing the interaction with the viewer and creating a unique evocation of what the rooms of the houses looked like.” Each of Sandy’s photographic dioramas is handmade and takes between 1 – 3 weeks to complete. More About Kolmanskop: Kolmanskop is Namibia’s famous ghost town. In 1908, the railway worker Zacharias Lewala found a sparkling stone amongst the sand he was shoveling away from the railway line, near Kolmanskop. His supervisor August Stauch, was convinced it was a diamond and when this was confirmed, the news spread like wildfire, sparking a huge, frantic diamond rush and causing fortune hunters to converge in droves on Kolmanskop. The town soon developed, becoming a bustling little centre and providing shelter for workers from the harsh environment of the Namib Desert. Large, elegant houses were built and it soon resembled a German town, complete with an impressive array of amenities including; a hospital, ballroom, power station, school, 4-lane skittle alley, theatre and sports hall, casino, ice factory and the first x-ray station in the southern hemisphere. Fresh meat could be purchased at the butcher’s, there was a bakery, furniture factory, a public playground and even a swimming pool! At the time, there was also a railway line to Luderitz. The development of Kolmanskop reached its pinnacle in the 1920’s, but the town declined after World War 1, when diamond prices crashed. In spite of, or probably because of, the isolation and bleakness of the surrounding desert, Kolmanskop developed into a lively little haven of German culture, offering entertainment and recreation to suit the requirements of the affluent colonialists. Unfortunately for Kolmanskop and its inhabitants, richer diamond deposits were discovered further south, and operations were moved to Oranjemund. Within a span of 40 years Kolmanskop lived, flourished and died. Today the ghost town’s crumbling ruins bear little resemblance to its former glory. The stately homes have been nearly demolished by the wind, and are gradually becoming enveloped by encroaching sand dunes. In 1980, the mining company De Beers, restored a number of buildings, and established and interesting museum. McLea also captures graffiti in its natural environment, usually when walking the streets of Cape Town where he lives. McLea’s recent project ‘Urban/Rural Facade’ was born from a single piece of graffiti he spotted in the rural area of Karoo. It was a scarce sight, a large mural on a water tank hours away from any town. He decided to explore this juxtaposition of urban culture being present in a rural environment. McLea’s Urban/Rural Facades created by layering photographs of graffiti from the city over a rural scene. The technique he uses is paper tole, where parts of an image are repeated and layered above each other, creating a three dimensional effect. He uses this effect mainly on the graffiti which pushes it away from the surface to represent that it has yet to fit in the environment. In late 2017 Sandy came to London and spent three weeks travelling the country. He gained access to the Royal Hospital cellars, Dover Castle, Fort Bourgoyne, Winchester Cathedral and other abandoned or derelict spaces in the UK…. The first two pieces from his trip are in the gallery now.They are of the kitchen and attic of West Horsley Place in Surrey. West Horsley Place is set in a 380 acre estate. It is a Grade I listed manor house dating from the early 15th century. Illustrious owners have included Henry VIII and Elizabeth I. In 2015 it was left by the Duchess of Roxburghe, in a surprise move, to her distant relative, the broadcaster Bamber Gascoigne. (You may have seen the press coverage about this at the time). Gascoigne has established a charitable trust and the house is slowly being renovated. More detail can be found on their website: www.westhorsleyplace.org 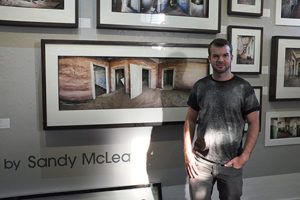